Unique Sweets is truthfully my favorite TV show, period. It’s on the Cooking Channel, the hipster and unconventional teenager of the Food Network, and it’s full of national gems. A spin-off of the original “Unique Eats”, this show exhibits different cafés, bakeries and restaurants in the country with crazy cool desserts and sweet treats. What’s better than offbeat confectioneries? The only thing I can think of is being in a city with so many! I’ve counted six locations in San Francisco that “Unique Sweets” has been to, talked about and aired on their show. Dynamo Donuts, which I wrote about before, happens to be one of these places. Another of these places is Craftsman and Wolves, in the Mission District. They’re known for “The Rebel Within”, which is a soft-boiled egg inside of an asiago sausage muffin. But once you walk up to their counter, you’ll see why else they’re famous and unique.

Everything they make is beautiful. Look at that chocolate stack. Would I buy it for $3.50? Maybe not. I had a grand old time in there fangirling behind my camera, though.

Look at that muffin. This I might shell out 7 bucks for if just for the experience (if not for the sausage part).  Inside your asiago muffin, you get a soft-boiled egg. Whoa. What an adventure to bite into.

Moving left towards the cash register, we see potential lunch contenders. A garden of choices. A display of attention to detail.

There’s where the “crazy cool” comes in, sweet or not. These could just as well be life-like ceramic sculptures of very talented artists, but this is really what these lunch menu items look like. I don’t know that I would ever go for the toast set up, but I would consider the haute dog.

I would buy this spherical tart just out of curiosity on how to eat it. Seriously, how do you eat that? Is it soft and moussey? Hard and fudgy? But you have to applaud how they put these things together to make them look like bird nests. And that petal of whatever it may be. 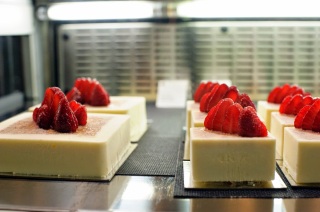 Their cakes are also other-worldly. They change varieties every so often as well. 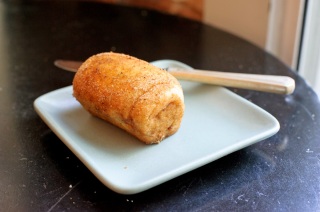 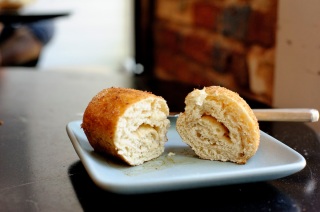 I went for a morning bun, because it was “only” $4. It was nothing particularly special, but it had a nice flavor of vanilla like I was eating ice cream. Morning buns seem to be more of a west coast thing, and definitely a San Francisco thing. No crazy citrus flavors like most morning buns have, though. The center was soft and chewy and the outside was crunchy from the sugar and maybe salt coating. I don’t think you can really go wrong at Craftsman and Wolves: anything you get will be really good, or at least an experience.
If you ever get the chance, do make it to Craftsman and Wolves. They made it to Unique Sweets for a reason. Apart from the occasional typo, they know what they’re doing. Check out their website, or better yet, their Instagram for more ridiculousness. Whether you get a Rebel Within or a bird’s nest, CAW will have something to spark your curiosity.

Editor’s note: I have since consumed six dollars worth of the Valrhona chocolate chip cookies for free (serious perks of interning for one of the best food photographers in the city). Surprisingly, I found the Valrhona chocolate to be too dark…I guess my palate hasn’t grown up as much as I thought.  Which would explain the reactions of all the adults around who fell in love with the cookies. Don’t get me wrong – apart from the chocolate, I did really enjoy the cookie. It was chewy and thick. But seriously, I could have eaten one for breakfast – so dense, so big!