Here’s 25% of the reason I studied abroad in the spring instead of the fall: Ithaca Apple Harvest Festival. Here are all things fall and festive, appl-y, pumpkin-y, yummy, and generally happy.

On my usual list of things to find are maple cotton candy, kettle corn, a baked good from the Mennonite community, lunch, an apple ice cream sundae from Purity Ice Cream, and, of course, an apple cider doughnut or two. Unfortunately, this year was a bit of a disappointment. First off, Purity Ice Cream wasn’t there this year 😦 I was very upset by this. And maybe the rest of my disappointment came from being at Apple Fest for the fourth year in a row, as well as the construction in the Commons, where the vendors usually stay. But it was a lovely day out of an awfully wet and cold week. I started off with lunch from Star Truck, celebrating their grand opening as Ithaca’s first vegan food truck. 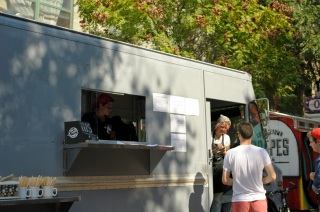 If you were wondering, I did not in fact know “Star Truck” had an all-vegan menu until I ordered the Mac n’ Chili with cornbread. All things that should have some animal product in it, right? Well I was pleasantly surprised by the mac and “cheese” and the soy proteined chili. The cornbread could definitely have been less dry. But this is saying a lot coming from the last person to sacrifice her meats for beans, and dairy for…other.

They could do with some remodeling of the truck, but vegan joints beware! There’s a new truck in town and they’re coming to ball.

It may look kinda green, but it filled me right up, and I’m sure it was way healthier for me. And not bad at all. 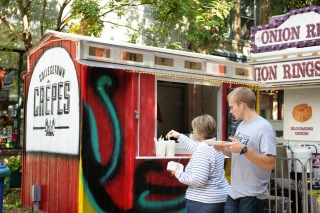 Though I went with some hearty food for lunch, I didn’t pass on the opportunity to chat with the server behind “Collegetown Crêpes”. This is another new cart in Ithaca that hangs out by Cornell during the second half of the week for lunch. I think there’s been a law passed recently in town allowing food trucks to slowly come back to the streets. They had been previously prohibited, because politics. Will keep you posted on that one. 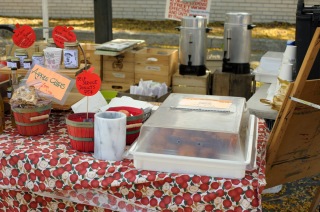 Little Tree Orchard’s good ol’ stand with their good ol’ cider doughnuts. You can’t leave without getting at least one.

Never forget them. Always worth it. Unless there’s a 30 minute wait, in which case just find them next week at the farmer’s market. 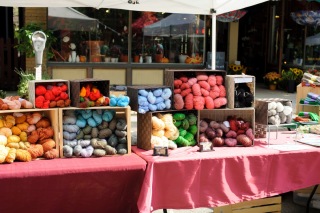 For the last couple years, I had heard about this one thing that everyone was trying and loving. So I added to my list one more treat. The new go-to apple fest carnival food: pumpkin funnel cake. Consensus: a most poor life choice. I split this with Danielle, and I felt quite awful very soon after. I should have known it was a bad idea when I noted the powdered sugar discolored by the grease seeping through. Not worth it, ya’ll. Sorry. 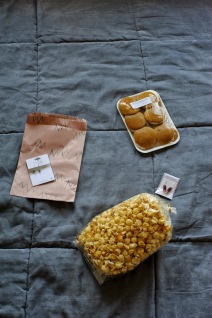 Pictured: Two pairs of earrings from a couple of the many crafts and artisan booths, kettle corn from a new place because my usual place wasn’t there, some pumpkin whoopie pies.
Not pictured: cold cider.

Maybe once the Commons is back in action, I will return for round five.