Way back when I was in San Francisco, I made some cute coconut cupcakes and made a semi-real shoot out of it. I had apparently started an entry for them a week after I made them, so I guess I’ll humor you with the original post…here ya go! In the meantime I will be buying groceries and re-acquainting myself with this apartment’s cozy kitchen. Yes, I’m back in Ithaca for the home stretch!

This could be considered another rendition/episode of “What’s in the Pantry?”, because for the last month we’ve had so much coconut in the house, and I wanted to do something about it. While searching for vegetable recipes in the Barefoot Contessa cookbook, I stumbled across the recipe for Ina’s famous coconut cupcakes with cream cheese frosting. If you’re also wondering “cream cheese frosting? With coconut?”, we were on the same wavelength. Until it actually happened. 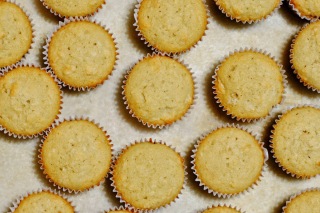 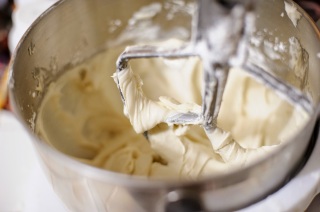 Making frosting is so fun, and so dangerous. I’m hoping cream cheese frosting
is healthier than buttermilk frosting. The one issue that never seems to be resolved is the overwhelming amount of frosting that is left once you have frosted the cupcakes.
I think Jake and I halved the ratio of cupcake:frosting for the chocolate chip cookie dough
cupcakes, and only three cupcakes were left unfrosted. Note to self: halve frosting recipe
always.

Look at that pretty cupcake! It’s all about using the knife tip to make those cool-lookin
layery lines.

Enjoy the following photos from the miniature shoot proceeding the baking. 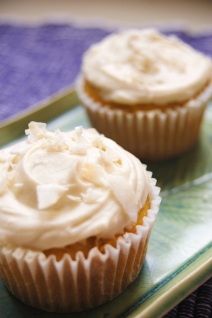 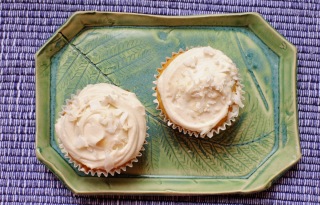 Carmen’s recipe notes: first off, you can always squeeze more cupcakes out of these recipes than they say. Second, I used yogurt and twoish teaspoons of lemon juice instead of buttermilk (not in the pantry) and they came out fine – dense, but not dry. Lastly, do what you will with the frosting recipe. However, I do recommend halving it if you don’t need a sweetener for your next 15 bowls of oatmeal.
Ina Garten’s Coconut Cupcakes
(3/4 of this recipe) Makes 24 cupcakes
Ingredients
3/4 pound (3 sticks) unsalted butter, room temperature
2 cups sugar
5 extra-large eggs at room temperature
1 1/2 teaspoons pure vanilla extract
1 1/2 teaspoons pure almond extract
3 cups flour
1 teaspoon baking powder
1/2 teaspoon baking soda
1/2 teaspoon kosher salt
1 cup buttermilk
14 ounces sweetened, shredded coconut
For the frosting:
1 pound cream cheese at room temperature
3/4 pound (3 sticks) unsalted butter, room temperature
1 teaspoon pure vanilla extract
1/2 teaspoon pure almond extract
Directions
Preheat the oven to 325 degrees F.

In the bowl of an electric mixer fitted with the paddle attachment, cream the butter and sugar on high speed until light and fluffy, about 5 minutes. With the mixer on low speed, add the eggs, 1 at a time, scraping down the bowl after each addition. Add the vanilla and almond extracts and mix well.

In a separate bowl, sift together the flour, baking powder, baking soda, and salt. In 3 parts, alternately add the dry ingredients and the buttermilk to the batter, beginning and ending with the dry. Mix until just combined. Fold in 7 ounces of coconut.

Line a muffin pan with paper liners. Fill each liner to the top with batter. Bake for 25 to 35 minutes, until the tops are brown and a toothpick comes out clean. Allow to cool in the pan for 15 minutes. Remove to a baking rack and cool completely.

Meanwhile, make the frosting. In the bowl of an electric mixer fitted with the paddle attachment, on low speed, cream together the cream cheese, butter, and vanilla and almond extracts. Add the confectioners’ sugar and mix until smooth.

Frost the cupcakes and sprinkle with the remaining coconut.

Recipe can be found here