There’s a note in my phone called “NYC Sweets”, where I add all the good/famous bakeries, ice cream shops, and doughnut cafés that I need to check out and experience as a new New Yorker. At the top of that list were the two Manhattan digs of Dominique Ansel, Cronut® extraordinaire. In all seriousness, Ansel actually registered the word and concept of the Cronut; even his hashtags have the ® symbol. It did take a couple of months, but I got myself to Dominique Ansel Kitchen, and Dominique Ansel Bakery. Why would one of the best known French pastry chefs need two establishments within a 15 minute walk of each other (I checked)? See below and you’ll know…or not.

My first stop was DAK: the Kitchen. I flip-flopped on the order of my visits, as DAK opened in the spring, a few years after the Bakery. At DAK, the big draw is not a pastry but a concept: “Time is an ingredient”. For many of the menu items, a key process of the recipe is left until the item is ordered. For example, if you order the made-to-order chocolate mousse, you’ll be waiting on your chef to fold the chocolate ganache with the meringue and whipped cream before it gets to your staircase-seat, soft and creamy. Or if you get the 1:1 lemon yuzu butter tart, the baker will be behind the counter in the kitchen, assembling together the crust, cream and lemon zest into an equally soft beauty. The indoor seating is all along a large set of steps, with cute round cushions designating buttox-placement. If it’s well-populated, DAK may be tricky to stay in, especially if eating with a friend. In the summer, outdoor seating and an ice cream window with flavors like “gianduja with orange blossom spritz, sea salt, and hazelnut brittle” are open and bustling.

I got the mini matcha beignets. I see these being really great for people who don’t like their desserts being too sweet. I wish I were one of those people. On the other hand, I liked the nice kick of strong green tea flavor over the beignets, and the six that I got were a good serving size. Just don’t breathe too hard when you’re eating, unless you’re wearing an apron.

All in all, a generally cool idea being experimented with at Dominique Ansel Kitchen.

Next up: the OG, Dominique Ansel Bakery.

I remember when I googled “cronut” five years ago, and landed on a New York Times article explaining the phenomenon of waiting in line for hours to purchase a $5 pastry in the dead of winter. I was like “nah”. Minus the pastry, all of those things sounded wrong to me. No way would I spend my day in the city standing in the cold for an overpriced dessert. But things change, people change. When I learned from friends at work that you could preorder Cronuts from the comfort of your home, I knew that having this rare creature could be done, and must be done!

Off I went, setting my phone alarm to 10:50 a Monday morning of August to remind me to log onto cronutpreorder.com to claim my prize. After much website traffic difficulty, all the available Cronuts for the first week of September were sold out, and I was without. But of course, I tried again the following week, and to my surprise, had no trouble reserving two Cronuts for a Sunday afternoon. Pro tip alert: this was because the Cronut flavor changes every month, and the first time I tried, the Cronut regulars(?) were ready to pounce to be the first to try the latest flavor. I now know that if you preorder a Cronut, wait to reserve one for the middle of the month, and you won’t run into trouble.

When I finally got to skip the line and turn heads with my box of Cronuts at 2pm on Sunday, it was September, and the flavor was bergamot and Earl Grey.

After all those years of seeing Cronuts on my Instagram feed and trying copycats (pretty good ones, in France no less), my time had come. I was embarrassingly giddy to open the box.

The bright yellow icing on top tasted strongly of the eponymous tea, and the cream filling had a subtle citrus and slightly bitter taste from the bergamot fruit. The pastry itself was crispy on the edges from the sugar coating (oh yes), and soft and chewy on the inside. So, like a croissant, but better. And this pastry is actually quite large. It barely fit in the palm of my hand. 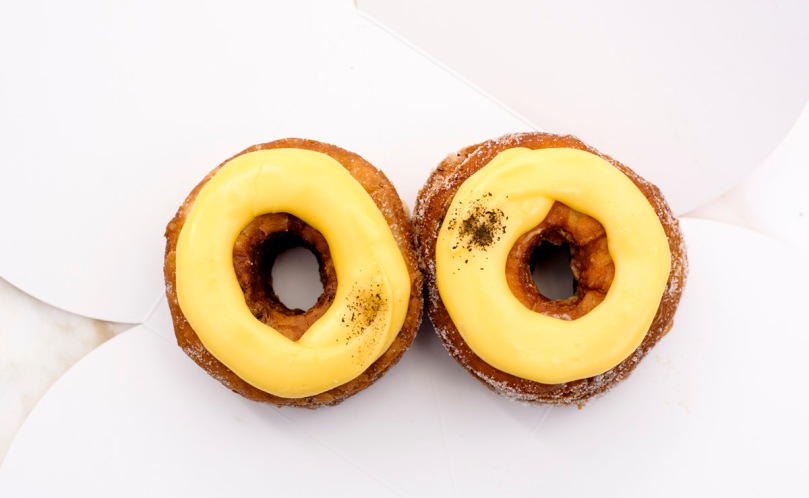 Turns out, the Cronut is worth the hype, and probably those $5, too, when you think about how it’s made. First off, the whole process takes three days. Once the laminated dough is made, it has to proof, then it gets fried. Then it gets filled, and then it gets topped with icing/ganache and garnish. Would I ever in a million years stand in a line wrapping around the block for it? No. But why would I, if I can buy one in advance with technology? Here’s how: 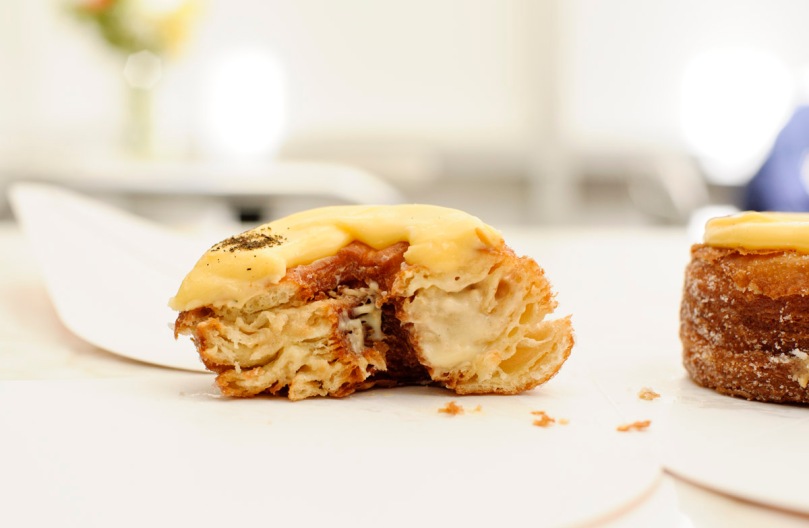